A wild and secluded stretch of coast lies at the very southeastern tip of Pender Island marked by a lighthouse on the ridge at Gowlland Point. An expanse of rough water eddies and swirls offshore where the currents of Plumper Sound and Boundary Pass converge. Gowlland Point, Brooks Point and their coves form an undeveloped oceanfront park at this location and is one of my favourite places. I love to wander here amongst the cliffs, shingle beaches and deep forest. It is also one of the first places I take visitors to our sunny island.

There are two ways to enter this dramatic coastal domain. The first is by descending a wooden staircase from the small parking lot at the southern end of Gowlland Point Road. Turning right you wander along a cove lined by driftwood logs, drawn by the prominent green and white beacon at the end of the ridge that forms Gowlland Point. The unmanned beacon is topped by a powerful light, which flashes once every four seconds. Visible for seven nautical miles the lighthouse is a navigational guide and helps ships avoid the dangerous currents and perilous rocks of this point.

From the slope behind the beacon you can enjoy glorious panoramas across the waters and see that Pender is but one in an archipelago of numerous low, green islands stretched out in a northwest to southeast direction. Gowlland Point was named sometime between 1857-62 after John Thomas Gowlland, 2nd Master aboard the British ship HMS Plumper, which was exploring the region. Many of the Gulf Islands and places on them are also named after naval officers of that era. Brooks Point was named more recently for the family that fought for its conservation. An invisible line, lying only a few kilometres into the water, forms the boundary between Canada and the United States, and divides a single geologic chain of isles into the separate Gulf Islands and San Juan Islands.

On a clear day, the imposing Mount Baker in Washington State dominates the skyline to the southeast, its majestic snow-capped peak drawing the eye. Located on the mainland, it is one of a series of volcanoes that stretch along the Coast Range on the western edge of North America. Shivers run down my spine when I think of the consequences should Mount Baker erupt and, as an active volcano, it could at any moment.

For a brief period in the springtime, the ridge of Gowlland Point comes alive with colour as a multitude of rare and fragile chocolate lilies bloom. The sun glistens on the green grass, which is beautifully speckled with these delicate brown flowers. 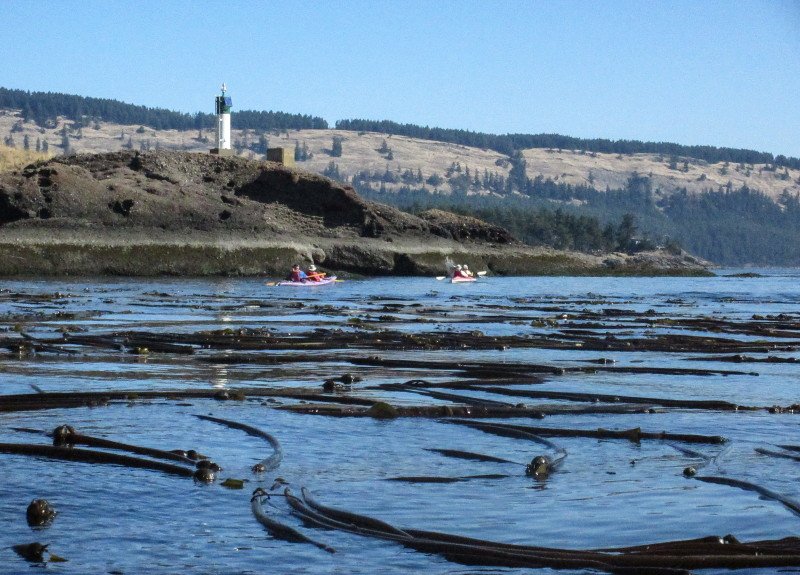 The second entrance leading into Brooks Point Regional Park is via a boardwalk through a lush wetland green with moss and, in the springtime, dotted by pink wild roses. You then enter a tangle of blackberry bushes, which ripen in the late summer. Linger over this passage because the countless, very tasty and free blackberries are irresistable.

Smiling and licking your lips you then pass through grassy meadows and finally reach the ocean where, standing on a rise of layered sedimentary rocks, you have grand views onto Boundary Pass and the San Juan Islands. After vigorous fund raising by Penderites, the Brooks Point Park was developed and opened in 2000 and, together with neighbouring Gowlland Point to the east, forms an undeveloped oceanfront nature area of 4.81 ha. The coastal area is a mix of rocky bluffs and log-strewn beaches with numerous rocky outcrops, many of them formed by a distinctive conglomerate rock composed of rounded cobbles cemented together.

At low tide, I love to explore the tidal pools for sea anemones, barnacles and star stars. Small crabs scamper here and there and hide under rocks. Bull kelp beds flourish in the nutrient-rich waters and I frequently see the glistening heads of seals swimming in the kelp. And if I’m fortunate a pod of orcas passes with their dorsal fins rising and falling in the fast-moving waters.

Kayakers are often seen for, facing the south, this is a great place to stop on the popular circuit around south Pender Island. The paddlers haul their kayaks onto the rocks and warm up in the hot sunshine, while gazing across a few kilometres to the United States. Huge ocean going freighters plod through Boundary Pass, their large bow waves giving a clue that these ponderous boats are actually moving quickly and steadily.

Numerous driftwood logs are scattered on the shore, and are like a necklace along the rim marking the high tide. The logs are great for sitting but also entice young children, who, aided by older children, i.e., their parents, use the wood to construct forts and shelters. 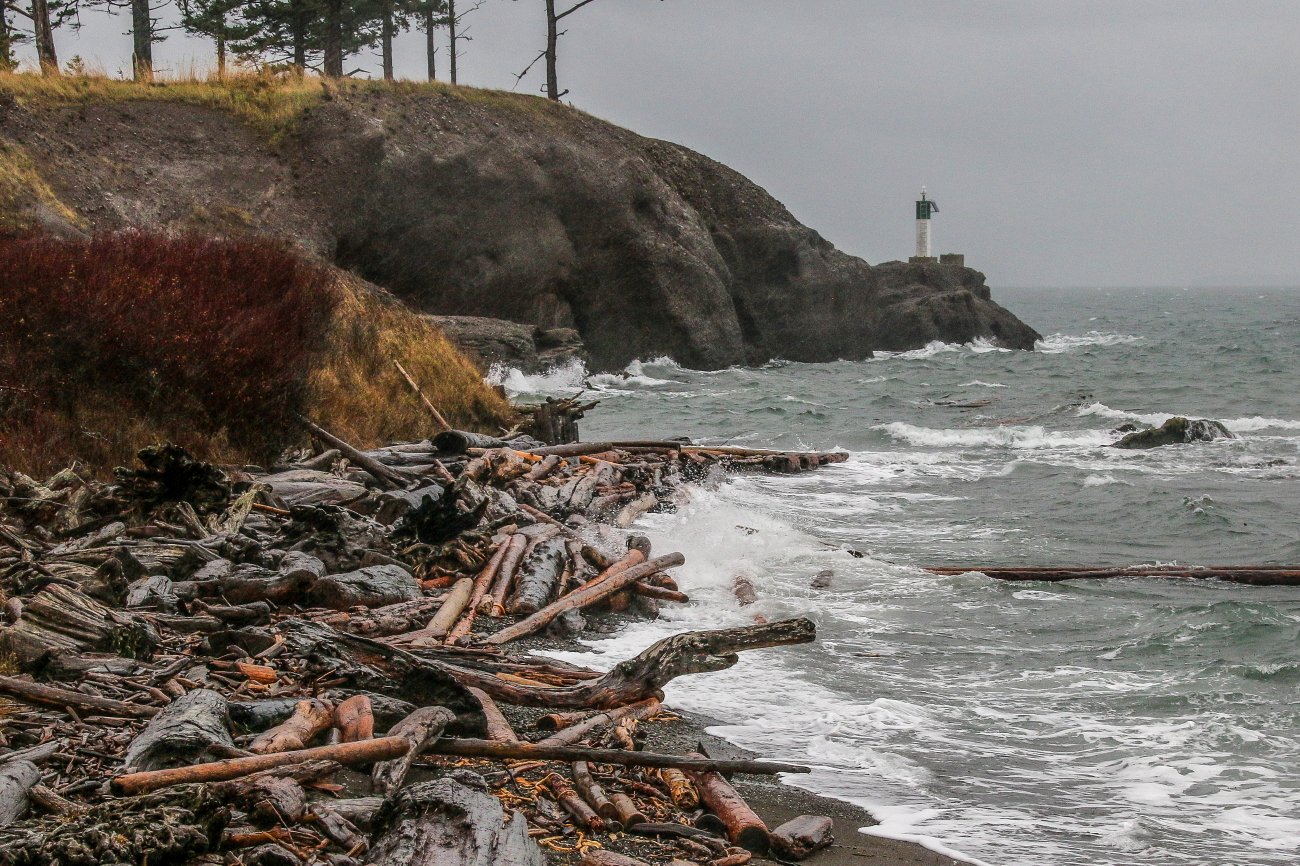 Gowlland and Brooks in Cozy Season

Although sunny summer weather is best for visiting, there are two other times that draw me. One is early in the morning, for at sunrise the darkness of the distant southeast horizon transforms into a brilliant blaze of oranges and reds. It is truly inspirational, and so humbling to realize it happens every day, over and over again… for eternity.

I also enjoy coming to Gowlland and Brooks Points in the winter months when stormy weather brings a starkly different mood. I love to be immersed in nature’s fierce majesty with my senses overwhelmed by the howling wind, crashing waves and torrents of rain. I feel the immense power of nature, and am humbled by how frail and small we humans are.

But now it is summer and home beckons. Turning my back on the coast I follow the trail to the forested part of the parkland. Suddenly, the sunlight dims and I’m enclosed among towering, ram-rod straight Douglas firs and the occasional slouching, reddish-barked arbutus trees. What a dramatic change! I can smell the pine needles and fresh sap, and hear the ratatat-tat of a pileated woodpecker seeking insects. It feels like gnomes and fairies are watching from the thickets. Too soon I’m back at my car, wishing I had time to stay longer. 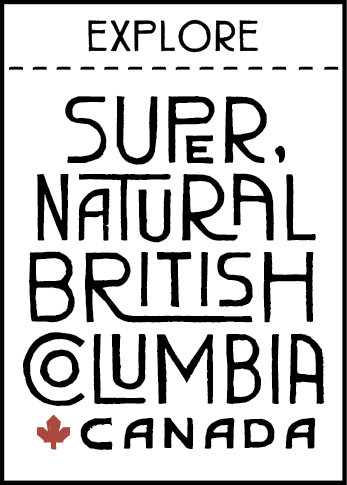